Living On The Edge

This time, instead of doing the usual interview questions, I thought I would do something a little different as this young rodeo competitor, Zakk Tompkins of On The Edge rodeo apparel, has quite a story to tell. You can find Zakk and his brand on Twitter at @OnTheEdgeRodeo . Check out his  unique brand on his website at On The Edge apparel.

I’m a 23-year-old cowboy, entrepreneur and freelance writer born and raised in central,IL.

Running both a full service equine facility, and an apparel company, keeps me fairly busy! Average days consist of feeding and caring for the 18 horses we have on site providing full board, training and lessons. Whether it be cleaning stalls, fixing fence or working colts my days are filled with these chores for the most part.

We currently do about 20 lessons a week with folks of all ages. Lessons are western riding ranging anywhere from complete beginner to those wishing to compete in rodeo. The latter is perhaps the most important part to me and the motivating factor in continuing even during tough times.

As a young kid, like many others I wanted to be a cowboy. Although I didn’t fully understand all that the lifestyle and job entailed, I knew wanted to be a part of this amazing subculture. Unfortunately, I was already committed to competing in wrestling and martial arts.

I began training Muay Thai with my dad at age two, as he had competed professionally prior to my birth. I vividly remember religiously watching episodes of Walker Texas ranger and then having to “Walker fight” my dad after each show. This consisted of him being the bad guy and me of course playing the part of Chuck Norris. By about 4 years old, my cut kicks were leaving sizeable welts on my dad’s legs which apparently was a green light to further my training.

As the years went on my training continued. I began to compete across the country at national events. Although I loved the sport and travel, I always wanted something a little different. I just wasn’t sure what.

School work and sports came easy. I had many friends and a seemingly happy home life. Yet, even though I was only twelve, I was slowly loosing myself, slowly dying. As fear, doubt, and anger consumed me, I fell into a deep depression.

I don’t tell you this to make you feel sorry for me, I tell you this because I want everyone to see and realize that depression is a biological disease. One that does not discriminate between race, gender or socio-economic status.

The ridicule at school became nearly unbearable. I was withdrawn and depressed and couldn’t explain why. Being someone who relied on logic, the feelings of sadness and anger being inexplicable were totally unacceptable to me. No matter what I got or how good life was, I was depressed. Coming home only to lay under a blanket in total isolation. Weight gain and self loathing followed. I allowed the symptoms of the disease to consume me.

This was a mistake that at the time I wasn’t aware I was making, and had no idea how to combat it. As the symptoms worsened, I finally spoke with a professional. In the midst of getting the help I needed, things continued to worsen.

At age 13, I left a suicide note and ran away from school. I will never forget every detail of the steps I took that day. I was found very shortly by my father who had been contacted by authorities. As he eased my mind and convinced me to come home I felt some relief. I was admitted to a local mental health facility where I spent three agonizing days. Help was not immediate and it took years and personal dedication to make any headway.

Although I still suffer often from depression, I have found one of the greatest God-given coping mechanisms – purpose via horses.

One thing that drove me to get help from day one was that I knew others, who were less fortunate than me, were suffering the same as I was. As I slowly dropped out of traditional sports and grew older, I found various ways of becoming involved with horses.

I began dating a girl from school my freshman year who had a few Haflingers and was involved in Pony Club. Although English wasn’t my first choice for riding, it was my only option. My girlfriend at the time began teaching me to care for and ride the horses they had. Before long, I was volunteering full time at a local barn. I worked seven days a week doing the worst jobs you can find on a farm. I did this as a way to afford lessons.

I spent every free moment watching people ride and train, learning what I could. I watched and read everything I could get my hands on. Eventually, I got a paying job as a glorified stall boy at another local barn and took the horse I had purchased there. After about a year and working with several other trainers in both cutting and pleasure, I began leasing the property and running Westbrook Stable. This is the full service facility I now run.

When I took over, it was a small operation providing boarding only with about 8 clients a month. Over the past three years, it has grown to 18 horses, a lesson program and training.

Having struggled through the grind to get where I am, I wanted to find a way to give back. We began a rodeo team for youth and adults that provides all the necessary equipment, knowledge and connections at the most affordable rate possible. It is amazing how many young lives we have been able to touch, and honestly is better than any medicine I’ve ever been prescribed. It took a combination of correcting the chemical imbalance, professional therapy and a LOT of self-help.

My girlfriend and I now compete in rodeos across the Midwest in barrel racing and tie down roping respectively. And yes, we are seeking sponsors!

This eclectic background is what drove me to start my apparel company called On The Edge. I wanted a brand that represented a lifestyle. I began designing apparel with a message. The message was simple – Lose the fear and doubt, live on the edge and chase your dreams! The brand is still small, but is gaining steady business we sport my brand and travel the rodeo circuit.

As last year was my rookie year in IPRA, I had a lot of tough times and lessons to learn. I’m now practicing harder than ever. In tempo with my usual MO, my goals for this year are sky-high, yet attainable. I am currently working to gain sponsors as well as preparing myself to chance to compete in RFD Tv’s The American. I will also be part of a six shooter series put on by a popular stock contractor on the IPRA circuit and am looking forward to a chance at winning the series and buckle. 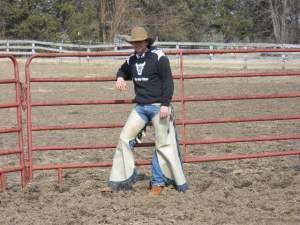 If any one person can take an ounce of motivation from my story of struggle and perseverance, then it has all been worth it. My personal strategy every time I back in the box is to improve on ONE predetermined area of my roping during that run. Perfection is great but only comes after the building blocks are set in place. With that in mind, I don’t expect to be perfect.

My pastor, Jason Schifo was a major factor in my mindset. After hours and hours of talking with him, I finally realized that perfection wasn’t ever going to happen. It was beyond my control. What was in grasp of my control was the proper mindset, and remembering to get better with each and every run to the best of my ability. Leaving it all in the arena, one run at a time.